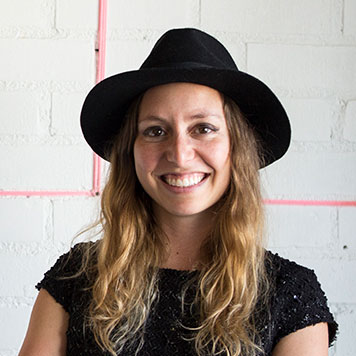 In 2009, Natasha Case founded Coolhaus with Freya Estreller. Natasha and Freya launched their architecturally inspired gourmet ice cream sandwich company from their barely drive-able postal van at the Coachella Music Festival, which brought their ice cream to an audience of 100,000.

Over the festival weekend they garnered a loyal following and a great deal of viral press, returning to LA with a rapidly growing social media fan base and an eager audience of foodies. Since then, Natasha has been named a Forbes “30 under 30” and Zagat “30 Under 30”, and has been featured in many national publications and TV shows, including the Food Network’s Chopped and King of Cones, and Andy Cohen Live.

Coolhaus has become one of the leading innovative small dessert businesses, growing significantly over the years to include 4 trucks and 2 storefronts in LA, 2 trucks and 1 cart in NYC, 2 trucks in Austin and 2 trucks in Dallas, Texas. Now, consumers can even find Coolhaus’ pre-packaged ice cream sandwiches, hand-dipped bars, and hand-packed pints in 4,000+ gourmet grocery stores nationwide, from Whole Foods and Sprouts to larger retailers like Kroger and Safeway.

Today, Natasha is the CEO of Coolhaus, creating new product opportunities, building new relationships and innovating in ways that keep Coolhaus on top of its game as the company’s rapid expansion is set to continue.

In our interview series Archipreneur Insights we have spoken with more than 40 Archipreneurs. Experts and entrepreneurs in the field of architecture, building and development have answered our questions and giving us insight into their creative and unusual operations of their businesses and projects. From these interviews we want to share with you the most inspirational […]

Do you want to get into the heads of the top initiators and performers from the architectural community? If so, we heartily welcome you to “Archipreneur Insights”! In this interview series, we talk to the leaders and key players who have created outstanding work and projects within the fields of architecture, building and development. Get […]