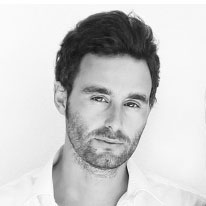 Mário Sousa is an architect. He has studied in Porto at FAULP. In September 2007, he has joined Richter & Dahl Rocha office and collaborated with them in Lausanne for several years.

In 2011, Mário Sousa has founded MIMA, together with Miguel and Marta and dove into an investigation on housing schemes and prefab construction methods, started already in 2007. At MIMA Lab, Mário is a creative brain and systematically comes up with ideas for new products while still following closely the design development of the ongoing projects.

“MIMA is a multidisciplinary design office that focuses simultaneously on the formulation of architectural concepts and in their conversion to reality, under the form of simple and accessible products. MIMA intends to be more than an architecture office, and rather epitomize a brand new philosophy of simplification and seduction that will gradually apply to the most varied scales of architecture.

A quick glimpse at the current economical and social scene automatically undermines the idea of an architecture produced slowly and heavily by individual craftsmanship. Gradually, one should point towards a close involvement between architects, industry, software and mass production, aiming for the development of quick, high quality and cost efficient architectural products.

Prior to becoming a product, each MIMA project is conceived as part of a complex system, optimized and tested to the smallest detail. Each new product embodies a complex treatise, which implies the translation of architectural rules into software, ultimately allowing for any user to formulate his/her own personal project within the universe of rules that has been pre-established by the architect. Besides allowing for a customized conception, this custom software automatically transmits all the information to the factory, allowing for an immediate cost estimation and subsequent prosecution of the construction.

MIMA’s aim is to bring forward the development of a “Sensible Architecture”. Sensible relates to reality, to observation, to simplification, and mainly, to results. MIMA does not only conceive architecture, but rather delivers architecture, seeking to carry forward the Modernist dream of prefabrication, of integrated design, of architectural democratization. A “Sensible Architecture” can also be sensitive, by means of applying traditional materials with a thorough sensorial care, stimulating the way people identify and engage with space, images and forms.”

Are you stuck in the endless cycle of reinventing your service with every new project? Tired of negotiations, meetings and writing proposals? There is an effective way to optimize your design-based business that will allow you to finally stop wasting precious time. Productizing architectural services will enable you to streamline your procedures and create assets […]

Welcome back to the interview series “Archipreneur Insights” at archipreneur.com with architects who do interesting things. The series highlights people who have an architectural degree but have since followed an entrepreneurial or alternative career path in the field. The fourth interview is with the founders of the MIMA House, Marta Brandão and Mário Sousa from […]