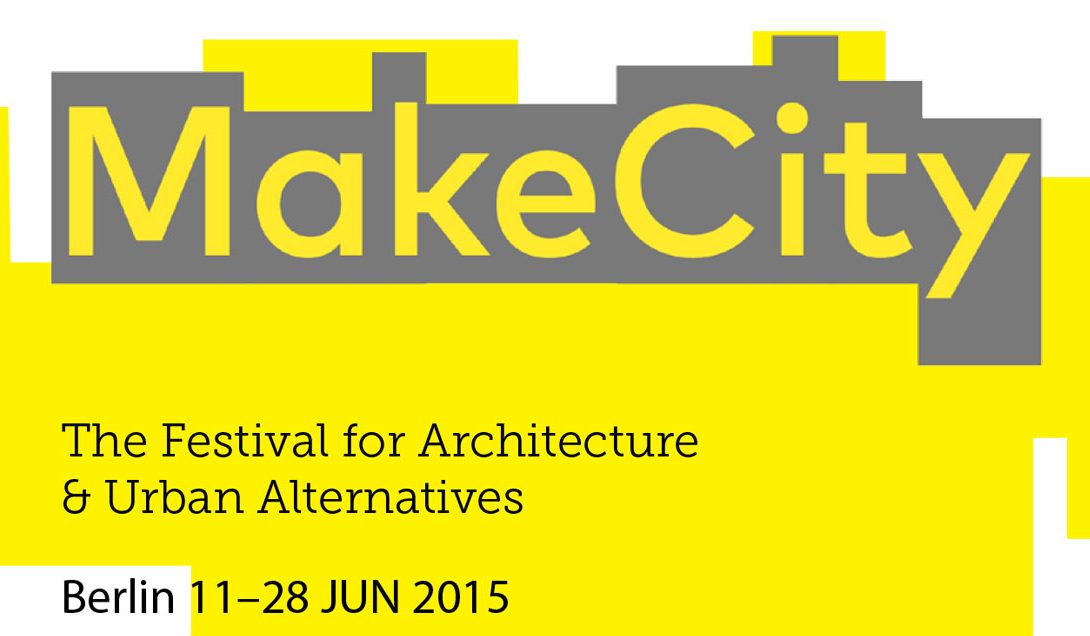 MakeCity – A Festival for Architecture and Urban Alternatives

MAKE CITY is Berlin’s first festival for architecture and urban alternatives, bringing together architects, planners, civic groups and developers in a citywide conversation on thinking about and designing the city of Berlin differently. Read about the key topics and how to learn from Berlin’s vibrant Self Made City scene.

In the last three weeks, Berlin has become the international center for making cities differently. The first MAKE CITY festival ended on June 28th. I attended some of the panel sessions and found their content very inspiring. Creating alternative ideas and solutions for our cities is a huge topic in urban hubs around the world.

Over 120 international partners organized this festival – the first of its kind – together with Founder and Curator in Chief, Francesca Ferguson, who stated at the first press conference on June 9th:

“Berlin as a city is still exceptional, with exceptional free spaces and opportunities. Here, one can think and make city differently.”

According to Ferguson, Berlin has already proved itself to be exceptional and, in the future, it will have the chance to do things differently. Few other cities in Europe have such a volume of free areas and spaces.

Similarly, no other city can lay claim to such creative potential, while at the same time having so little in the way of capital – also in terms of potential investors. When money is scarce, people are compelled to take action. As a result, there are prototypes for what may constitute the ‘building of the future’ that break traditional boundaries and even question entire professions and processes. 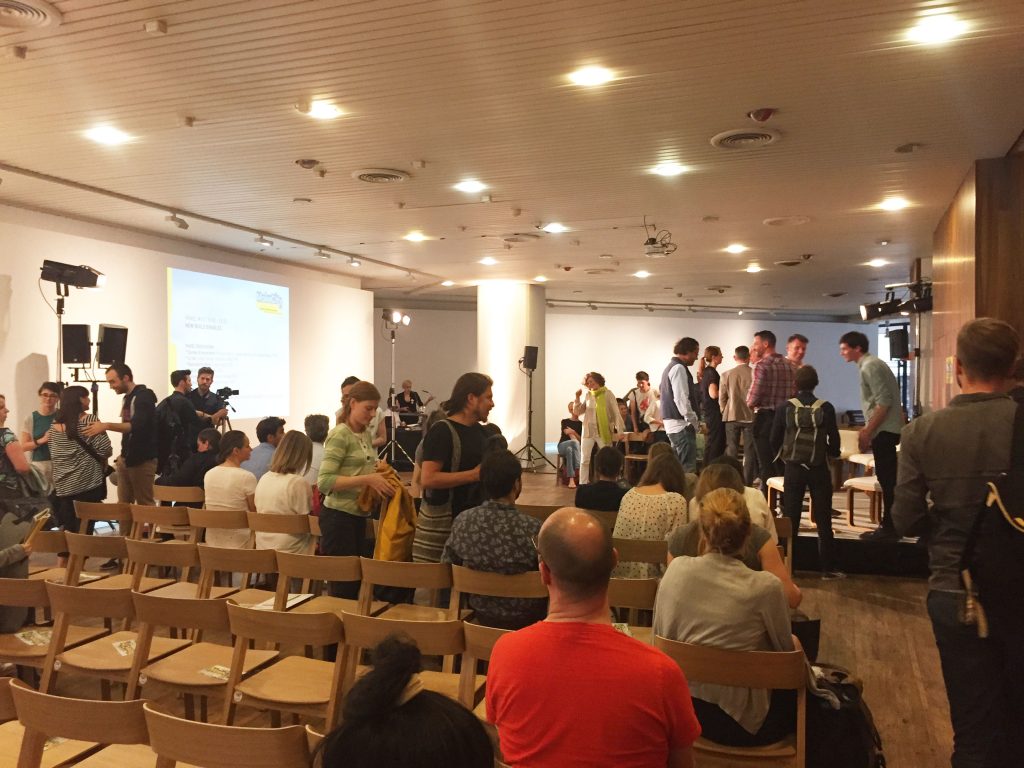 The festival partners are convinced “that our cities should be determined by those that live in them, and that profit motives should be secondary to solutions that create positive effects for urban communities”, declares curator and author of Self-made City and founder of AA Projects, Kristien Ring (US).

Indy Johar (UK), architect and institutional innovator, sees the city as an ‘Empathy Engine’ that needs to be unleashed. Adam Greenfield (US), writer and founder of Urban Scale in New York, whose goal it is to develop designs from a human perspective, is resolutely opposed to the smart city: “I am far more interested in creating circumstances in which ordinary city dwellers are able to acquire an understanding of their participation in civic life.”

This first festival for architecture and urban alternatives has been founded upon three key themes, all focused on the inaugural concept of “Re_Sourcing the Urban”.

The act of ‘commoning’ is considered here as a collective imperative: one that redefines spaces and public property beyond a motivation for profit and beyond the developers’ logic.

As cities are increasingly being regarded as enterprises to be competitively managed in the pursuit of economic growth – now so more than ever – the commons takes on greater significance as a political process. Urban commons are a crucial tool to be employed in what Michael Hardt describes as the “act of making and reclaiming that which we manage collectively”.

In-keeping with this idea of wide scale participation, urban commons can be seen as civic spaces that allow for the free, unhampered exchange of ideas. In this way, the act of commoning becomes a collective exercise through which such spaces may be rethought and ultimately reinvented.

The second key theme is Urban Open Source. MAKE CITY asks how the growing culture of civic participation can be transformed into innovative, sustainable architecture and urban planning agendas.

Will urban development remain in the hands of singular winning bidders for real estate and public lands? Or will a new concept-based planning agenda (Konzeptverfahren) make way for a Berlin model for new collaborative practice? The southern Friedrichstadt, one of the largest areas under renewal in Berlin is, with the newly inaugurated social project ‘Bauhütte’, the result of intense negotiations between commercial clients, architects-as-investors, residents, and the local government.

One of MAKE CITY’s founding partners, Christian Schönigh (DE) from the ‘Zusammenarbeiter’ proposes the new urban imperative: “all these ‘alternative developments’, as they are called, are accepted as genuine alternatives for urban planning”.

The third key theme of MAKE CITY is Urban Living/Working. The festival featured new flexible workspaces, affordable residential housing and factory halls in the middle of the city. Cluster-living and co-housing projects question modes of living together.

Time-shifting floor plans blur the boundaries between the private and the public, and consider the patchwork family as a vital entity in cities. Minimal and flexible living is as much a theme here as is the notion of existing resources: former industrial sites transformed into cultural centers.

Everything is reusable. ‘Radical Minimal’ (the reduction of living space) is featured, as is ‘Radically Modern’, an exhibition at the Berlinische Galerie that re-evaluates the precious resource of 1960s architecture in Berlin. 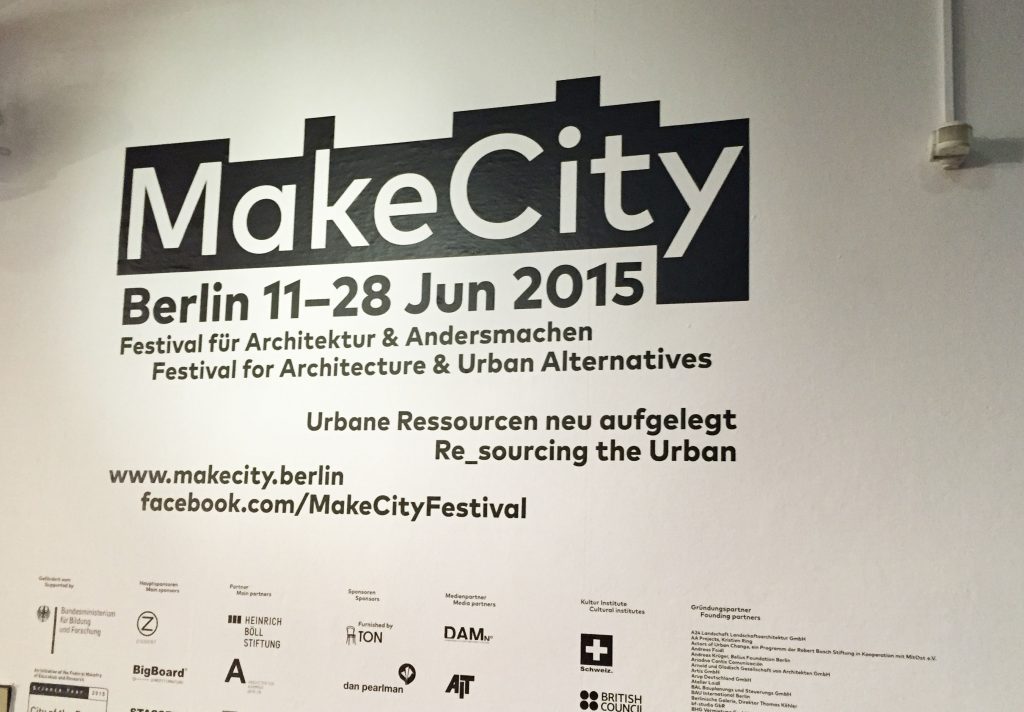 “Rurbanization” as a concept, with its focus on urban resilience, social sustainability and the recycling of resources, plays a decisive role within the MAKE CITY discourse. Urban communities can emancipate themselves from dependencies as public resources are cut back; in the process, the role of the architect and planner will rapidly change.

“The traditional boundaries of the profession need to be continually questioned,” says Wolfram Putz (DE) of Graft Architects.

The Spanish critic and curator, Ethel Baraona Pohl (ES), sees “the role of the dissident architect not as a figure of resistance but as an opportunist who understands his/her context and decides to react and adapt in a Darwinian sense, where not the strongest but the most flexible species succeed”. 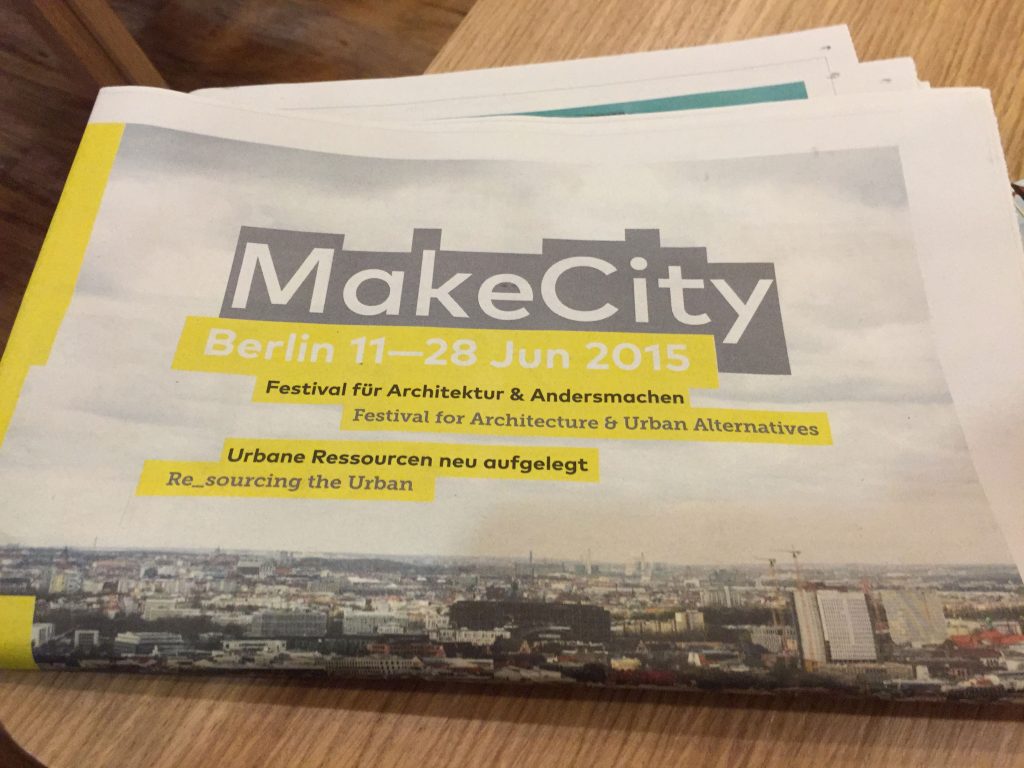 How Did the Festival Continue?

What I liked about the festival is that they showed a lot of unusual projects which were self-initiated by architects. In addition, they also invited developers who offered up creative and social approaches to their projects and highlighted that they wanted to create something sustainable and long term more than plan for projects that had a short return on investment.

In this way, the MAKE CITY festival displayed a lot of archipreneurial approaches. I think it would have been even better if more politicians and decision-makers from the city’s zoning and building departments could have been involved in the panel discussions, seeing as they play a key role as stakeholders in the development process.

Nevertheless, it was an incredibly interesting festival with completely free discussions, events, tours and projects reports. I am already looking forward to the next one. According to the organizers, they plan to make the next festival in 2017. Let’s be excited for what’s to come…

Feel free to share your thoughts in the comment section if you had the chance to take part in the festival. If you have not, check out their website here:

Note: Parts of the text above have been taken from the press releases of the MakeCity festival.

We won’t send you spam. Unsubscribe at any time.